Apple season and Back to School are two of my favorite times of year.  Apples are one of our favorites and we love picking them, eating them, dipping them, baking with them, cooking with them and drinking them (yes we add them to all kind of smoothie combos).

Check out this Apple Cashew Smoothie combo. It’s a super easy recipe that’s great for breakfast or an after school snack. It’s D-E-L-I-C-I-O-U-S and worthy of a little taste testing try, but before you do…here are a few fun facts about apples;

Looking for Nut Free? Replace the cashew butter with the WOWButter® and the Cashew Milk with either regular milk or rice milk.

Where is everything at my Price Chopper/Market 32 Supermarket?

Looking for another way to use apples in a smoothie?  Try my Apple Banana Smoothie for more back to school, apple picking season yum!

You can grab it, blend it and try it by clicking on this link: 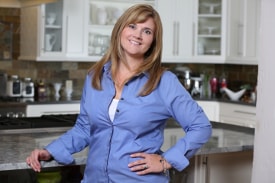 Instructions: Select all code above, copy it and paste it inside your blog post as HTML