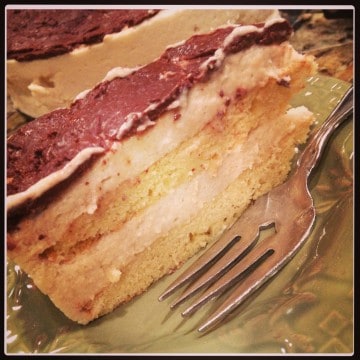 We made Ptichye moloko or better known as Bird’s Eye Cake or Marshmallow Cake, or what I refer to as ‘once in a lifetime cake’ :)!  We made it because we have been experiencing the russian culture through food over the course of the last two weeks while keeping track of the olympic games.  We launched with a cheer to TEAM USA & although we were cheering them on all the way, we were learning a bit about the host country as well.  We wrapped up our family fun festivities with this cake, which ended up being so labor intensive that I was almost hoping that they wouldn’t like it so that they would never ask for it again (wink, wink).  But, just as I was writing that on my social media, my husband was saying ‘this is so good you have to make it again‘.  However, as there is always an experiment being served at the counters, he’s soon to forget – lol!  In the end it was worth the make & we had fun sharing it with family & friends as it became a conversation piece as well as a good bite!

Ingredients for the Cake

Pre-heat the oven to 450 degrees.  Grease two 9″ cake pans.  Cream the margarine and sugar; add the eggs and beat well; mix in the flour and vanilla. Pour the (thick) in cake tins to form two 1/2-inch layers of dough; you will have to spread the batter. Place the pans in the top part of the oven and bake until golden; about 10 minutes. Remove and cool on cake racks.

Pinch of cream of tartar

In a small saucepan, mix the gelatin and one cup of water and place it on a low flame. Heat, stirring, until dissolved and then remove from heat.

In a large saucepan, mix the together the remaining 3/4 c water, sugar and the gelatin mixture just made. Bring the mixture to a boil, then reduce to a simmer and whisk constantly, until the syrup thickens (about 40 minutes). When a spoon lifted from the syrup forms an unbroken stream, stir in the lemon juice and then remove from the flame. Pour into a heat-resistant measuring cup (or container that allows for easy pouring) and cool to room temperature, stirring occasionally.

In a small bowl, cream the butter and then mix in the sweetened condensed milk. Set aside.

In a large bowl, beat the 3 egg whites with a pinch of cream of tartar until the mass forms firm peaks. Beating constantly with a mixer, pour in the cooled sugar and gelatin syrup in a thin stream. The resulting mixture should be thick and slightly shiny. Let stand 5 minutes.

Add the butter and condensed milk mixture to the egg white and syrup mixture, mixing gently with a whisk at first and then with an electric mixer until thoroughly combined.    Beat the 3 additional egg whites with a pinch of cream of tartar until the mass forms firm peeks & fold it into the mixture.

Place the chocolate morsels and butter into a glass bowl & melt on high for one minute.  Stir the ingredients together and spread it onto the top of the cake in the spring-form pan.  Let it set for an additional 30 minutes.

Before serving, remove the sides of the spring-form pan. I used a sharp, thin knife to run around the spring-form pan before removing it completely.  To serve, heat a knife under hot water to cut through the glaze without cracking it.

Tip: As soon as you are done with the pans that contained the gelatin and sugar mixture, immediately place them under hot running water to clean before the mixture sets. [googleplusauthor]

This Recipe Featured at: