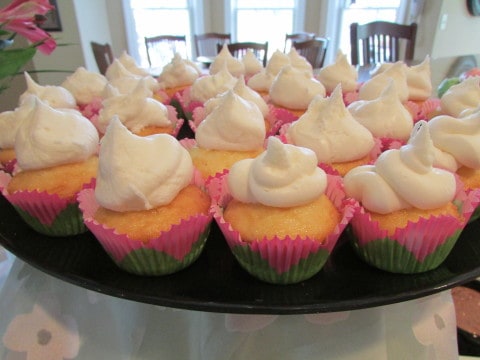 I would say that last week FLEW by as we planned Jenna’s Shower.  Who is Jenna?  She has been my intern and our family babysitter for the past three years and we adore her!  She actually was married in May to her fiancé; now husband.  They moved up their wedding rather quickly when he received orders shipping him overseas for several years.  Initially they thought that they would marry next summer and Jenna was considering an outside dessert reception, but that all changed and with very supportive families’, a fully planned wedding was pulled together in a six-week time frame.  Obviously, a shower wasn’t something that could fit in at that time.  So, my daughter and I hosted her bridal shower a couple of months later and turned it into an outside dessert reception from 2 PM to 4 PM instead! Whenever I’m hosting a party for someone I try to think of things they would like.  So, in addition to desserts, for drinks we served Mint Mocha Frappes in pink cups with pink striped straws.  Jenna LOVES the frozen coffee drinks so we thought we’d incorporate them into the festivities. Shower Bingo: Guests filled out a page of ‘gift guesses’ before the gift opening began.  The first person that guessed correctly, getting three in a row & yelling ‘BING-O’ won the latest Creme Brûlée Godiva Chocolates.

The Marriage Match Game: We created a live bridal matching game using card stock, scrapbooking paper, tulle ribbon and clothes pins.  We cut and glued hearts to the front of each.  Wrote words pertaining to Jenna & her husband and marriage on the back.  And, hung them on tulle ribbon with clothespins.  Throughout the shower guests would look for matches.  The person with the most matches at the end of the shower won the new Lava Cake Flavored Godiva Chocolates.

Words of Wisdom: We found these adorable tags for scrapbooking at Michael’s.  Each guest at the shower wrote a note to the bride for the shower scrapbook and shared words of marital wisdom.  My favorite guest share?  ‘Don’t hang wallpaper with your spouse!’

My daughter’s perspective?  ‘Let him buy you everything!’

Photo Station:  We made certain to grab a snapshot of each guest with Jenna for her album & provided props for a little fun!  Some people kept it on the serious note & others took it to the lighthearted side. It went great, but as you know, these events never go off without a little sweat, blood and tears – lol!  I thought I had it all in control, but about 45 minutes before the shower I felt like I was on cupcake wars & had only 15 minutes to finish; OH THE PRESSURE!  In the end Jenna had a good time, it all came together, she received beautiful gifts and she was surrounded by women who support her.  Here a few peeks from her wedding in May;