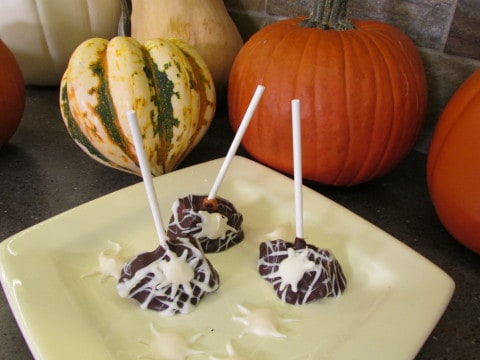 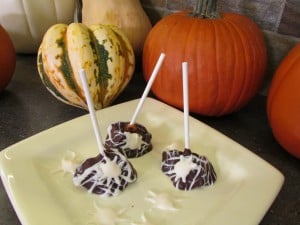 I love looking at the beautifully decorated candy apples that make their debut this time of year?  We used to buy a candy apple once in a while.  Each child would pick out their own, one or two bites would be taken & out they would be thrown a day or two later because no one could finish them.  Later, we would try buying one and slice it to share, but the outer layer would always break away and we’d eat it in jumbled pieces.  So, I came up with a solution.  Instead, I make the kids mini candied apple bites that are great treats for home, when company is coming or for parties.  They are easy, one bite is all that is needed and there’s no waste!  Recently, JoAnne came to visit with me at the Price Chopper Kids Cooking Club to make these bites and share these delicious treats with you all!  You can catch Joann in full action in the video below:

Write a review
Save Recipe
Print
Ingredients
Instructions
Notes
By Jodie Fitz
Jodie Fitz https://www.jodiefitz.com/
Dark & White Chocolate Candy Melts: There are many brands on the market. My favorite is Simply Melt Candy Wafers made by ChocoMaker that are found in Price Chopper Supermarkets in the produce area of the store.

Caramel Apple Wrap: These are made by Concord Foods, are typically located near the apples in the produce area in supermarkets. It is often a seasonal item in stores.
Candy Sticks: You can find packages of 50 for $1.99 at most crafting stores, but with a weekly coupon they can be purchased for less.