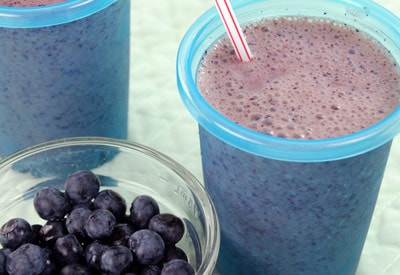 It’s July, which is also National Blueberry Month, which means it’s time to celebrate with blueberry combinations!  So, to start things off, we’re blasting forward with a little kitchen fun and making the Blueberry Blaster to share; a delicious smoothie.

* Native Americans once called blueberries “star berries,” because of the five points on the blueberry blossom that made a star shape.

* Early colonists made gray paint out of blueberries by boiling them in milk.

* The annual harvest of North American blueberries would cover a four lane highway from Chicago to New York if spread out in a single layer.

* Blueberries are naturally low in both fat and sodium. Put all of the ingredients into a blender and blend until it’s thick and creamy.  It’s like a milkshake, but healthier!