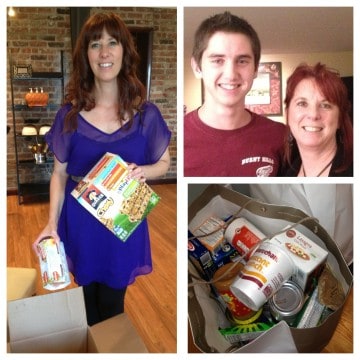 In the spring of 2012 I learned about the amazing efforts of the Regional Food Bank and their backpack campaign that helps to feed children throughout the school year.  Every week children who have been identified as ‘in need’ receive a bag full of groceries in their backpack each friday so that they have meals for the upcoming weekend.  I fell in love with this program for many reasons and I often visit many schools where these children attend, but for obvious interests I don’t know who they are.  Last week I had the unplanned opportunity to meet one of these amazing kids.  However, before I share this story, I want to thank Nuance Salon, The Image Studio & the Braiman Family, who collected in their neighborhood, for helping to launch the 2013-2014 school year collection efforts and at the very end of this post, please take a peek at the links & consider joining us in making a difference.

I was visiting a school & a little boy, adorably cute & very excited about my visit, took it upon himself to go to each table in his grade after we made the recipe I had brought.  He asked his classmates to rate the recipe from 0 – 5, with 5 being the highest.  He then came up to me as I was resetting for our next group to tell me what he was doing and to share that all of the kids gave me a high-five.  I was so very touched that I took a picture of them with their hands held hight with five fingers up (so often these kids have no idea the impact they have on me).  He then asked if he could stay and help me clean up before the next group.  I told him he had to ask his teacher & she whole heartedly agreed that he could stay & that he could pick a buddy to stay and help him too.  As the other adult volunteers and I and the two children began our busy work this little boy became very chatty & in his conversation he said ‘This is my lucky year!’  He then proceeded to tell me why he was so lucky….he said, ‘I won, I won food!’  It hadn’t dawned on me what he was talking about until the volunteer mom had asked him to explain further.  He then proceeded to tell us that his dad had told him that he had won, he had won food for an entire year.  He continued to share, ‘… that every friday, as long as I am at school I get a bag of groceries for the weekend in my backpack to take home’.

We told him how excited we were for him & what a great thing to win.  I had to fight to hold it together in that moment  & this chance encounter has brought tears to my eyes on several occasions since that meeting.  I am so honored to have met that little boy & even more honored that individuals are teaming up to help with the backpack program.  None of us are able to feed these children alone, but together we can make a much needed dent!  Here is the story from our 2012 collections & here is more information about the backpack campaign so that you can consider joining this growing team of caring individuals.

My car is filled & I’m set for delivery of the first collection.  I hope you will message me & consider joining us in 2014 as we will begin our efforts after the holidays in January and continue through to May.